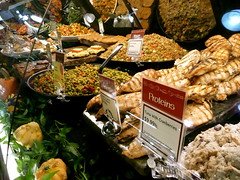 How healthy do you look and feel? What you eat could make a difference. While food makes us healthy, if we’re not careful, it can make us unhealthy too. If you eat the right foods you could escape many of the toils of aging–and hang on to your health and good looks longer.

What constitutes the right food or good nutrition would appear to be a controversial issue, judging from the range of opinions expressed in the media, in the market and by the neighbor down the street or Mother’s Aunt Susie.

But nutrition needn’t be all that controversial–nor dietary advice all that conflicting. The noise reflects a changing of the guard necessitated by increased knowledge about how foods interact with the body. Much of the controversy and conflict in opinion is exaggerated to score rhetorical points.

In the past fifty years, a great deal of research has identified close links between diet and disease. The focus is on some of our favorite foods and on such widespread disease as cancer, heart disease, diabetes and stroke—not to forget obesity.

From that research has grown a consensus among the vast majority of specialists in various health areas. With only minor differences, most groups offer these general nutritional guidelines–appropriate for review during March, National Nutrition Month.

Unfortunately, some of the foods we should be eating less of, such as soda pop, bacon, hot dogs, beer, cream, salted processed foods, etc., are produced by industries that are doing everything in their power to block dietary changes that would reduce company profits. That’s what much of the noise and controversy are all about.

Although these guidelines are relatively simple it’s the method of delivery–the meal–that actually “sells” the message. While we may want our meals to be healthful, we also want them to taste good, and we want them ready fast!

Given today’s complex lifestyle, with less time spent on shopping and cooking, it’s worth the time it takes to plan a score or more of meals we can rely on to provide proper nutrition, meals that will be fast to fix, meals that will be good to eat. The meal is the key to getting the nutrition message across.