Women have been carrying safety pins for a long time to protect themselves against unwanted advances from men. Given the continuing incidents of violence against women, it makes great sense to carry items that give you precious minutes to make your escape from men who are not deterred by safety pins.

Pepper sprays, alarms and stun guns are handy items to carry in your purse on public transport, among crowds, on a deserted lane or when unlocking doors and cars. They repel the aggressor and buy you precious time to make your escape. We found pepper sprays and alarms on healthkart.com . Stun guns are available on amazon.com .

Pepper Sprays: Pepper sprays are aerosols with oleoresin capsicum or active chili peppers which are inflammatory agents. Target them at the attacker’s eyes and face. They lead to tears, the eyes clamp shut, there would even be temporary blindness. The attacker would also experience pain and difficulty in breathing, a coughing fit could result, giving you time to escape.

Learn to use it well, since your only chance is one of catching the attacker by surprise. Buy a small canister that fits easily into your purse. You are likely to have a window of 10-15 minutes. Larger bottles can give you up to 30 minutes, but you are likely to lose the element of surprise when carrying a large bottle. Pepper sprays don’t cause permanent harm and are entirely legal. They come in key chains and aerosols. Personal Alarms: Alarms that fit into your purse are a way to attract attention when the attackers are more than one. They are available as key chains and other forms and are easy to carry. The alarm can sound anywhere from 30 minutes to an hour depending on the model. Some of them are combos with LED light that you can switch on to attract attention and are particularly good for dark nights. 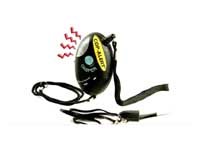 Stun Guns: Stun Guns can momentarily disable the person through electric shock. They carry high-voltage electric charge which is low in intensity. So the effect is immediate but isn’t damaging to the person. Press it against the attacker’s body and hold the trigger and the charge passes into the attacker’s body. Depending on the attacker’s body size and intent, you would need to hold it against the person for a few seconds. Available in multiple forms, ranging from lipstick tubes to mobile phone look-alikes, they are easy to conceal and handy in emergencies. Stand alone stun guns are available in addition to those which pack an LED light.

Take your emergency safety into your hands. Buy one of these items, keep them in working condition and within reach.