It’s that time of the year again. It’s Cannes. Even as many eyes were focused on the stars – who’s dressed well and who’s not, most turned to Aishwarya Rai to see how she managed her look with the post-pregnancy weight gain, which, let me reiterate as I’ve done in our previous blog post, is her own business and no one else’s.

We were pleased to note that she had done extremely well in this department. The bulk is there, but cleverly hidden through flow, color, texture, pattern and style of the outfits she wore. It’s a combination of each of these elements that has brought out the winner.

In the traditional outfit designed by Abu Jani-Sandeep Khosla, by using an intricately embroidered blouse in ochre, red and a hint of deep green, she has stuck to monochromatic colors which we had suggested – colors that belong to the same family to hide the bulk.

Although the hour glass figure is missing, the outfit does a smart job, leaving just a hint of the bulk in front, nothing more than that. No hint of cleavage this year. That’s one of the important rules of dressing when bulky. Cleavage and bust are the first items that show up bulk. By using a blouse with a mandarin collar, the outfit takes care of the heaviness about the neck and shoulders. Long sleeves are just right although the sleeves do show a hint of the bulk, but you have to look for it to see it. The pattern on the upper arm helps cover it up well. 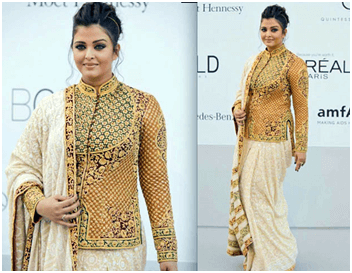 The texture of the blouse is stiff with all the embroidery, making it just right. Soft garments are fine for slender bodies, but when wearing a close-fitting outfit, a stiff garment is just the right one for bulky bodies. The pattern with a slightly rounded design that stops just below the bust divides the blouse itself in half cleverly, camouflaging the bulk in the upper body the way a single pattern could not have.

Stopping the blouse at the upper thigh is just the right thing to do. Any longer or shorter would not have served the purpose.

The flowing cream pallu draped over the right shoulder prevents us from seeing the full figure, giving just a vertical half view of her figure. Another plus.

The sari is a wonderful garment to hide the heavy proportions within limit of course. Using the sari for the lower half is a clever play. By using the cream color at the bottom and the darker top, a feel of airy, lightness is retained.

When it comes to her face, the fat seen in photographs just a few days earlier is just not visible – not in the same way. Pulling up the hair and piling it up gives Aishwarya’s face an elongated touch, lending a leaner look. So, although there is a hint of the fat, the final look is great.

All in all, while the slenderness of earlier years isn’t there, neither is the bulk of the recent months.

A long flowing garment from neck to toe, it is made to cover the bulk. A soft fabric, it uses black, grey and cream in the right vertical proportions. The design is such that the grey part of the fabric ending in a cream front flows loosely but with elegance down her front, keeping the bulk away from the eye. 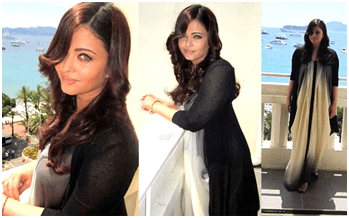 With a just a hint of cleavage, the upper bulk is cleverly hidden with hair falling beneath shoulders on either side. The hair style itself covers half her face, again not giving us a full view of her face. Just the right thing to do.

For her photocall appearance too, Aishwarya wore a flowing garment in monochromatic colors of blue and green. Blue in the front with animal print and a green back that had floral print, she stuck to the dark colors for the front where it mattered and brighter shade for the back. V neck, high V back, side cutouts and bell sleeves to her elbows and beyond, it gives no hint of the flab. The waist gathered a shade higher than the normal waist – almost like an empire waist – was the perfect way to cover front flab. Here too, her hair framed her face on both sides giving a leaner look. 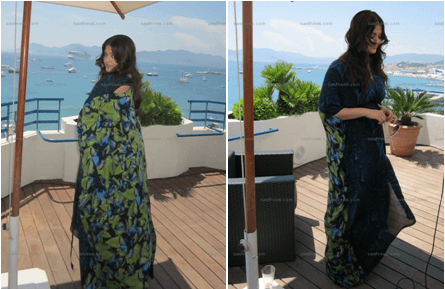 Of all the four ensembles, this midnight blue dress was the only one that showed her weight, yet it was with grace and dignity. The strapless gown which could have made the weight about her shoulders and upper body awkwardly visible was prevented from doing so by a long-sleeve sheer cover over her shoulders and arms. This embellishment on the cover was a good distraction that prevented the heaviness in the arms from showing more than necessary.

The heavy middle was visible more so because of the thin belt about the waist, but the deep shade of the dress coupled with the scooped design beneath the belt with the pleat like vertical fall made it seem narrower. The long train too did a good job of taking attention away from the heavy middle. 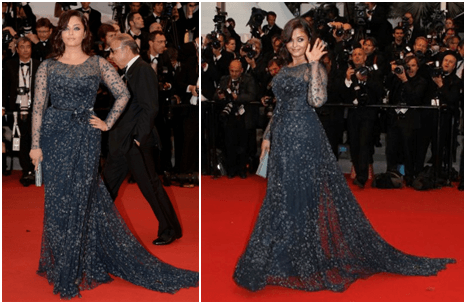 The more important thing is that Aishwarya carried it off with pride and dignity and looked completely comfortable in the ensemble. That’s what matters finally – whether you are comfortable with yourself and she projects that with elan.

Again, while we maintain our view that celebrities have a right to their personal space and the right to manage things at their own pace, it is heartening to see that Aishwarya Rai has put criticism over her weight and look to rest.