Barack Obama, the President of the United States of America has just been re-elected for a second term in office. We couldn’t help taking a look at his sartorial style and the image he projects.

Obama has made it to Vanity Fair’s 2009 International Best-Dressed List1. He is also one of Esquire’s World’s Best Dressed Men.

A Man with Basic Values

As Barack Obama’s White House profile reads, “His story is the American story — values from the heartland, a middle-class upbringing in a strong family, hard work and education as the means of getting ahead, and the conviction that a life so blessed should be lived in service to others.

These simple, practical values are reflected in his sartorial style. Clean cut suits with a single-breasted jacket, lapels of standard width and pockets with simple straight flaps. Never out of fashion, this style never fails to look appropriate.

His simple style conveys the statement that he is one among his people without resorting to the carefully cultivated casual look of some of the political contenders, past and present.

The Man for the Job

President Obama wears suits in navy blues, charcoal grays or a black, sticking with colors at the formal end of the Style Scale. With that Barack Obama has power dressed his way to a second term as USA’s President. His message is clear. He is here to do the tough job he has on hand.

His suits have come to be known as the Obama Suit and are always of a single-breasted, two-button jacket. With that he pairs a single-pleated trouser. Coupled with a white shirt and a blue or an occasional red tie, he looks classy and simple, projecting the image of trustworthiness and simplicity – in short that he is the man for the job in these difficult times. 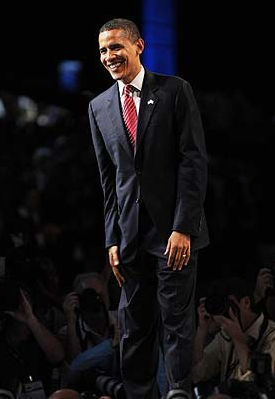 The White House bio of the President confirms this image, “President Obama’s years of public service are based around his unwavering belief in the ability to unite people around a politics of purpose. In the Illinois State Senate, he passed the first major ethics reform in 25 years, cut taxes for working families, and expanded health care for children and their parents. As a United States Senator, he reached across the aisle to pass ground breaking lobbying reform, lock up the world’s most dangerous weapons, and bring transparency to government by putting federal spending online.

A Man who is Himself

Neatly tailored, his attire accentuates his slim figure, giving him a trim look. His idea of being casual is not to dress in a pair of jeans like some of his contenders on the campaign trail have done in the past, but to roll up his sleeves in neat folds as if he has already got down to the tough job ahead with precision and care. 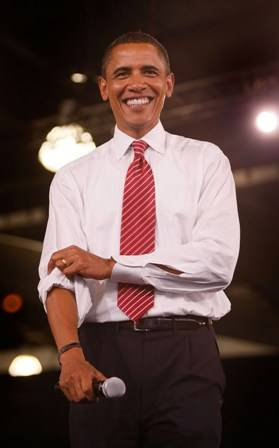 The unvarying nature of his style has a purpose to it. He sticks to the simple colors to stay focused on other more important matters at hand1. With his simple style, he makes the statement that he has his priorities clear. That he remains true to himself. 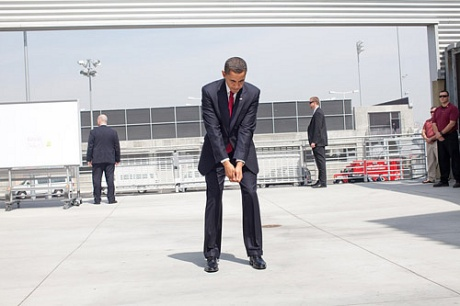 With that, Barack Obama has dressed his way to the Presidency, the man for the job, someone with simplicity and straightforwardness, who has rolled up his sleeves to tackle the mammoth task of pulling the struggling country out of a downturn and out of a war it didn’t want to be part of.

Walking with him is First Lady Michelle Obama known for her excellent sense of style, perfectly balancing the President’s simple attire. 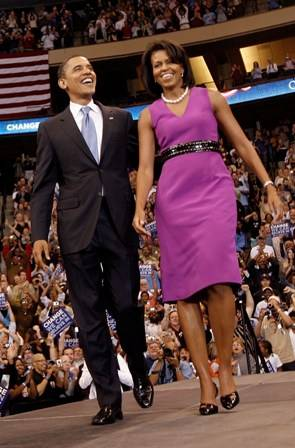