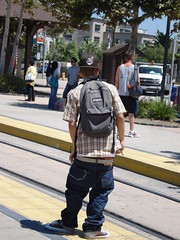 While getting gas in my car, my attention was caught by something about the attendant. Curious, I gathered all my gumption and asked, “Say, young man, help me understand something. Why do you choose to wear your pants so low that we get full view of your yellow print under-pants? What’s your thinking—your logic?”

“Oh, well they’re comfortable this way,” he offered with a toss of his hair.

“No they’re not,” I countered. “I’ve seen you pull and tug at them three or four times already.”

He rolled his eyes, and re-offered, “Well, I guess this is the way I’ve always worn them, since I was a little boy.”

“No it’s not,” I re-countered. “Your mother dressed you in cute little pants that came up to your waist. You’ve only been wearing them this way for the last few years.”

“OK, so help me understand why waddling around with the crotch of your pants down around your knees is cool—and exactly what does it mean to be ‘cool’?”

“Uh, being cool is being different—showing people that I’m different.”

“You know, different than grown-ups, my dad, all the old guys…..”

“Well, your dad probably wears his pants around his waist—even tucks his shirt in most of the time. Is there something bad about that?”

Now he’s at a loss as to how to explain or excuse his behaviour and he’s not about to tell me his real reasoning. But perhaps he’s formed no real reason. Perhaps he’s never really thought about it. He’s just blindly going along with the…..

“I know,” I offered, “it’s the trend among a lot of boys and men. But why do you think it’s the trend?” I queried.

Now we’re beginning to get somewhere, so I explained the source of the look.

“The look trickled up from street kids and hip-hop celebrities, copying the look of prison inmates. Can you guess why prisoners go around with their pants hanging down?”

“Uh, no,” he continued to murmur, shrugging his shoulders–but by now he was mildly interested.

“Historically, prisoners have their belts taken away from them, for two reasons. One, so they don’t hang themselves with it. And two, so they can’t escape. A man can’t run very far, very fast, holding up his pants. Is that who you’re trying to look like—a prison inmate?”

“No, not at all,” was the solid answer at this point.

“So tell me, what do you think you communicate to the people who see you?” and he looked at me quizzically. “What are you saying about yourself?” I continued. “That you don’t know how to pull up your pants and fasten a belt? That you’re so brave ‘cause you dare to wear them that low? That you’re cool? That you’re a little bit bad? Do you think people want to come in here and get gas from a guy who’s a little bit bad? Where’s this look going to get you in life?”

“Uh, I dunno, I guess never thought about it that way.”